The Range Rover Evoque is the production model of LRX concept vehicle which was unveiled at the North American International Auto Show in January 2008. Such was the impact of this LRX concept that the British government granted 27 million to the Land Rover to manufacture this compact SUV at its Halewood assembly facility in Liverpool in March 2009. In India, the production started in July 2011 after collaborating with Jaguar under Tata Motors. After Freelander and Discovery, Evoque is the third Range Rover in the Indian market and comes in 2 body variants; 3-door and 5-door. The sporty and attractive SUV specifically targets the youth and the urban audience and stands apart from other vehicles in the over-crowded Indian roads. Land Rover has sold more than 90,000 units just within a year of its launch which proves that it is giving a tough competition to the existing high end SUVs like Audi Q5 and BMW X3 in India. The Evoque, with its many impressive features and looks is quite expensive, and ranges from 45 to 58 lakhs. 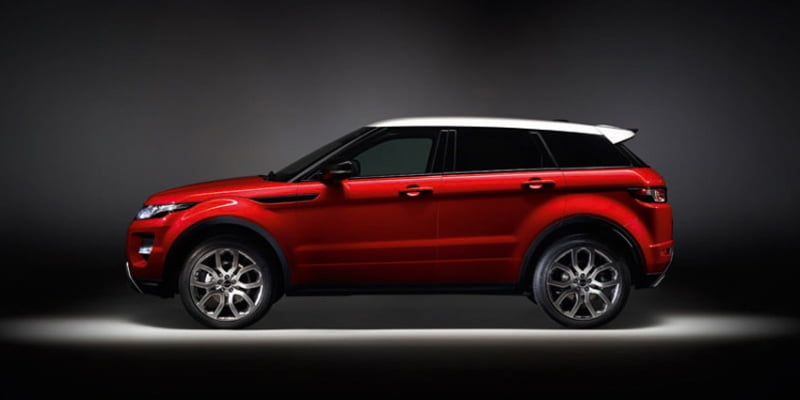 The sideline of this car is sleek, aerodynamic and sloping. The head lamps and tail lamps appear sharp and crispy when viewed from side. The sharp blend from bonnet to windshield, muscular shoulders, rising beltline, tapering roof, athletic 18-inch 7-spoked wheel aches with silver finish, rear spoiler, shining paint finish, wheel fenders and power-folding outside rear view mirrors (ORVMs) attract the most when Range Rover Evoque is viewed from the side. From the rear, tinted short and wide windshield, roof mounted sleek LED stoplights, sporty rounded shaped glittering headlamps, trapezoidal rear fog lamps and twin exhausts at either sides and black matt brushed skid plate, add up to the overall exterior looks of this compact SUV. Range Rover Evoque measures 4355 mm (3-door) and 4365 (5-door) mm in length, 1965 mm in width, 1605 mm (3-door) and 1665 mm (5-door) in height with a ground clearance of 215 mm.

The British car manufacturer does not make its cars for common people. It targets a specific audience, people who are rich and want their vehicles to stand apart in the crowd. The luxury of Range Rover Evoque continues when it comes to interiors also. The look and the feel of the expensive cabin are aesthetic and get the latest Terrain Response technology which changes the lighting inside the cabin with change in the terrain. The rich dual tone (black/metal) dashboard, generous use of leather and central console enhance the looks of this SUV. The central console docks a touch-operated crystal clear split-screen LCD presenting “floating” 3D vehicle data display, SatNav and dual view technology (two people can view two different things). The aluminum central console features a phone docking station which stretches the length of the cabin, separating the four seats. The instrument cluster gets attractive and sharp twin dials and are set deep in circular tunnel like housings and are adorned by bright chrome surrounds. 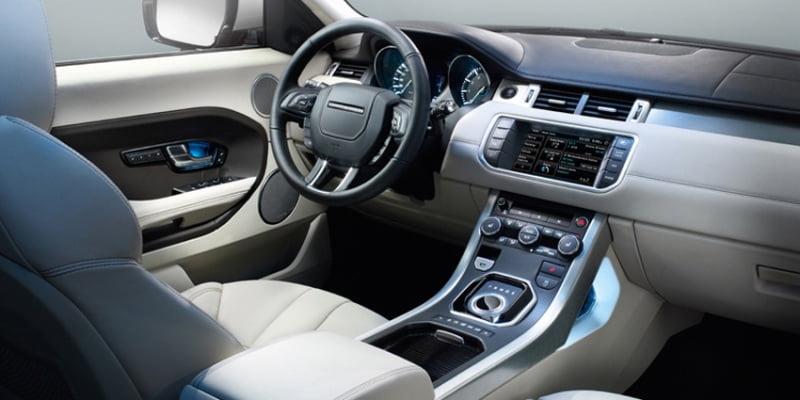