The SUV features eye-catching exteriors. The front gets a more chiseled and muscular look with the all-new black grille. It has sporting D-shaped LEDs in the rear, redesigned grill, new headlamp cluster and a revised bumper design. Daytime Running Lamps and a pair of projector lamps can be found nestled within the large headlamps. Headlamps are now equipped with LED Daytime running lights. Blue vision bulbs ensure better visibility in the dark. 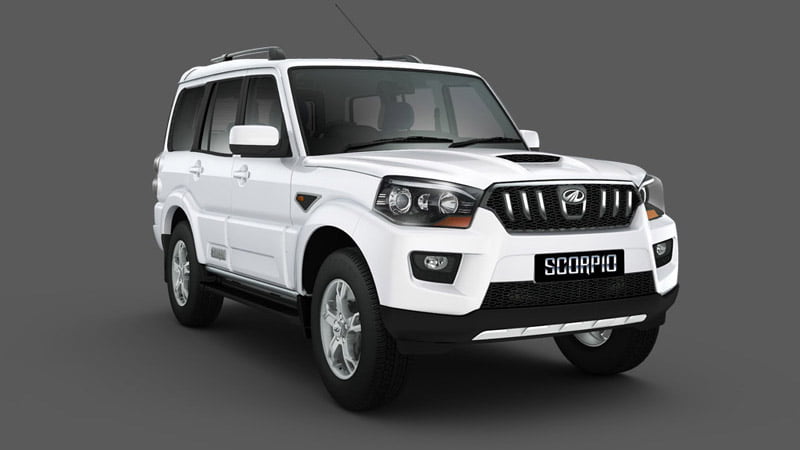 Bonnet is newly revised with a neatly wrapped front bumper. The rear windscreen has also been shortened slightly. New matt finished elements make a replacement for reflector strips. It also comes with a pair of well trained, dual tone ORVMs. The rear guard bar has rubber padding in the middle to assist climbing on and off. There are two carriages to facilitate different application; one is for carrying heavy luggage while the other finds use when going off road. There are a newly designed set of 17 inch with five spoke alloy wheels.

The new Scorpio has sophisticated interiors that’ll leave other cars looking improvident. The dashboard design is completely new and now gets a dual tone color scheme. The seats have been reworked in terms of cushioning which gets a height adjustment feature. It gets a new chunky steering wheel with audio control buttons, a touch screen infotainment system, a new instrument cluster, horizontally-stacked AC vents and a new centre console. 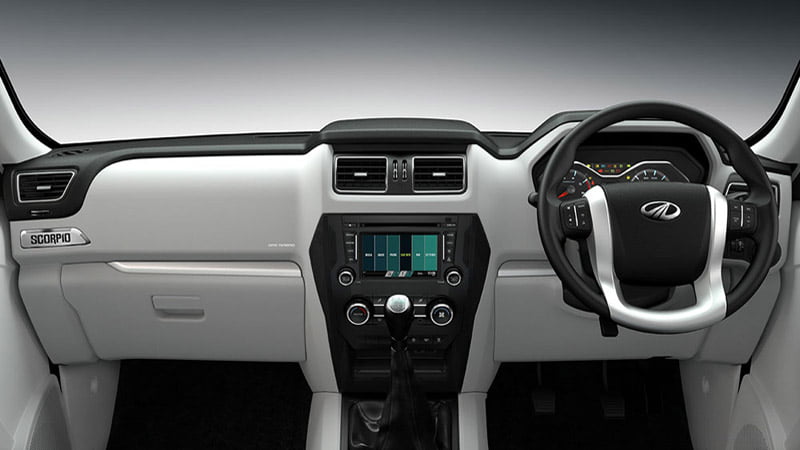 In addition to the functional enhancements, SUV surprised its owners with a technology that wraps itself in a single mobile application that controls the infotainment system. This can be used by the Customers who buy Mahindra Scorpio 2014 model.

The new-generation Scorpio has two engine options, the first being the 2.2-litre mHawk engine that produces 120 PS of power and 280 Nm of torque, and the second being the 2.5-litre m2DICR that produces 75 PS and 200 Nm of torque. The mHawk employs a top-mounted intercooler to improve turbocharger efficiency and is also equipped with a two chain drive stage system and hydraulic lash adjusters. The engine is based on the Bosch Common Rail system with solenoid injectors and fuel spray design for improving fuel efficiency. Scorpio is capable of reaching three digit speeds with ease. Transmission options include a 5-speed manual and a 6-speed automatic on the Scorpio facelift. One of the best features of this SUV is the unique Micro Hybrid technology that follows the stringent BS4 norms. There is apparent turbo lag up to 1800-2200 rpm.

Scorpio has a lightweight ladder frame design that’s has been produced by hydroforming technology to augment stiffness. It has a lower center of gravity for best handling and a better ride comfort. The new chassis has completely transformed the dynamics of the Scorpio to give it far better ride and handling. Its top heavy nature asserts itself in handling dynamics, of course, but it’s far less pronounced. The innovative multi-tuning shock absorbers offer more comfortable and safe ride than ever before. It has MacPherson strut in the front and torsion beams at the back. Maneuvering ability is amazing with minimum lateral movements.

Safety kit includes Dual front airbags for tackling terrains and Antilock braking system to avoid high power braking. Chassis has Crumple zones that absorb impact forces in case of collision and collapsible steering wheel as well. Once you apply it the lights will blink automatically that indicate the brakes would’ve been applied.