FIAT stands for Fabbrica Italiana Automobili Torino, which translates into Italian Automobile Factory of Turin. The company has launched a new hatchback-SUV crossover called the ‘Avventura’ on 21 October, 2014. It is the Fiat’s third launch in India after Linea, Punto. It is worth mentioning that India is the first country where the Avventura is being launched. Fiat Avventura is the best crossover of its class. This is the right choice for all off road adventure lover so the company also gives it the name Avventura. Avventura has some promising features than its competitors which will give it an edge for prospective buyers.

Fiat Avventura is available in 6 colors, namely Vocal White, Exotica Red, Minimal Gray, Hip Hop Black, Zafferano Orange (New color) and Bronzo Tan (New Color). Its center of attraction lies in the tastefully designed big tailgate-mounted spare wheel. Starting from the front it has same headlights and grille, which we have seen in Punto EVO but the thing which differentiates Avventura from its sibling is the lower bumper and wide air dam. 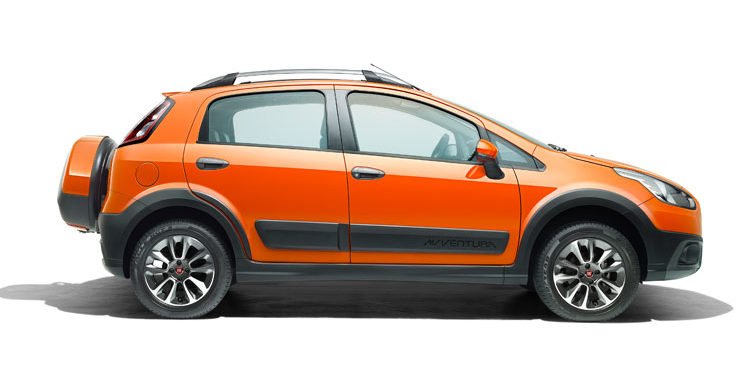 
On the front, the car has got certain noticeable features including, the front bumpers, tweaked front grille, an extensive body cladding and scuff-plates that impart rugged looks to it. Fiat has 16-inch alloy wheels that enhance the overall appeal of the car. Roof rails have been proven to serve two purposes. One is to have control over the center of gravity not to be raised much and secondly to fulfill its functional need. Avventura carries Body colored ORVM’s with turn indicators, black door handles and rubber side cladding embedded in Avventura name. We know it’s a small touch, but the same will surely attract a lot more attention than the competition.

The side profile is marked with three distinct lines, one starting aft of the front wheel and ending before the rear with an inclination. The second one, which is more profound shoulder line- starts above the front wheel and is carried all the way till the rear taillamp and the third one which is carried all the way from the edge of the front headlamp the top line of the rear bonnet. OVRMs which has the body colour, get integrated turn indicators. Other than that visible features on the sides includes 15 inch alloy wheels with different design of rim both for the diesel and the petrol variants. Finally the rear also gets a stylish set of features which includes the wraparound design of LED tail-lamps, centre mounted rear foglamp and four parking sensors.

Avventura has the same interior space as the standard Punto which is very spacious. The center console is stacked with three new gauges including the Inclinometers and digital compass that show the incline difference of up to 40-degrees. The front dashboard has black and grey color combo and is fitted with black leatherette-fabric seats with orange stitching in the front seats with Avventura embossed in them.

Avventura will be launched in both petrol and diesel versions. Diesel version is 1.3-litre Multijet engine, which will deliver 93Ps and 209Nm of torque which pumps out a peak power of 91.69 Bhp at 4000 rpm and a peak torque of 209 Nm of torque at 2000 rpm. Petrol engine generates a maximum power of 88.73 Bhp at 6000 rpm and a maximum torque output of 115 Nm made at 4500 rpm. Engine seems to drive out its maximum power between 2200 and 3500 rpm, whereas it becomes sluggish below the 2000rpm. A per the company mileage of Avventura is 20.5KPL for Diesel and 14.4KPL for petrol which is slight on the lower side, especially of Petrol one, you would get only 9 Km/L for petrol on road and 13-14 Km/L for diesel. The petrol version can accelerate from 0-100 kmph in 13.89 seconds and the diesel version in 14.64 seconds. Both engines are mated to a 5-speed manual transmission. The Avventura is an adequately powerful car with very good handling characteristics. Its life is more suited for the highway.

The Fiat Avventura has 20mm more ride height over the Punto Evo and now it stands at 205mm. Highly calibrated hydraulic steering keeps the tyres connected to the roads at all speeds. It has a superb suspension, mature ride and dynamics package. Suspensions are handled by front Independent McPherson Struts, Helical Coil Springs, Double Acting Telescopic Dampers, Stabilizer Bar and rear Torsion Beam, Helical Coil Springs and Double Acting Telescopic Dampers. It has disc brakes in the front and drum brakes in the rear. The ride quality improves as the speed increases and it can be driven easily on the slippery grass, wet slippery surface and potholes.

This vehicle is featured with ABS and dual Airbags with early crash sensors that detect a crash, then activate the airbags and restraints at the exact moment. It also features an Auto door lock, central locking, fire prevention system (FPS) and immobilizer with floating code, as standard for all the variants. Other safety features includes a 3-point ELR front seatbelts along with pre-tensioners, seatbelt reminder and height adjustability feature.