Los Angeles based stickercity is well known for its customized car wraps, high quality designs and installation of 3M protection paint and commercial fleet graphics since 2001. Stickercity has already worked on a variety of supercar projects, including McLaren P1, Lamborghini Huracan roadster, Porsche GT3, the Ferrari 458 Italia and Nissan GTR. Their Volcano yellow wild wrap design based on McLaren P1 caught everyone’s attention during last year’s Gumball 3000 Rally. Now stickercity has unveiled their latest design project based on one of the most iconic & divisive American Supercar. 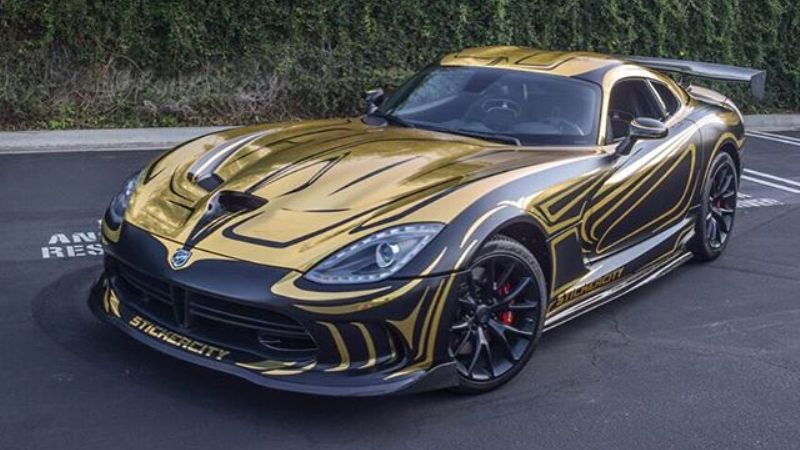 Dodge Viper is the ultimate American supercar with aggressive design and mind-blowing performance. Since its introduction in 1992, Viper has become synonymous with racing, lifestyle and aggressiveness. The new wrap designed by stickercity for this supercar is dubbed as “Dubai Camo”, and from the images released you can see that viper with this new wrap definitely looks sportier and aggressive than ever. With this volcanic yellow and dark black combination wrap, viper clearly stands out from the rest of the cars.

The current Dodge viper features naturally aspirated 8.4L, V10 engine which delivers 645hp and 600 lb-ft of peak torque and can sprint 0-62 mph in less than 3 seconds.

The full details about this wrap is available in the images that are added in the media gallery below.