The world’s first all electric SUV is gorgeous, futuristic and most capable sport utility vehicle in history. The Tesla Model X SUV is the safest, fastest and standard with all wheel drive system and 90KWh battery pack providing 250 miles (400 KM) of range on a single charge. After teasing for a almost couple of years, the Silicon Valley automaker finally introduced its first production model on 30th September and then handed over the keys to its first six customers in a private ceremony held at the company headquarters office.

So what makes this $130,000 seven seat Model X so special? Elon Musk’s electric SUV is equipped with some crazy features which are rarely seen in any other vehicles previously. Here is the list of those features of the Model X:

1) Falcon Wing Doors: Yes, we have already seen the roof hinged rear doors on many cars (AMG SLS) but what we didn’t know, how advance they could be. The “Falcon Wing” doors open upwards and use ultrasonic sensors to monitor the surroundings and opening span of the doors. The company claims doors can open with only a foot clearance on either side of the car in a tight parking place which set it apart from its competitors. The side and overhead opening is so large that parents can put children without ducking or without hitting their heads on the roof. 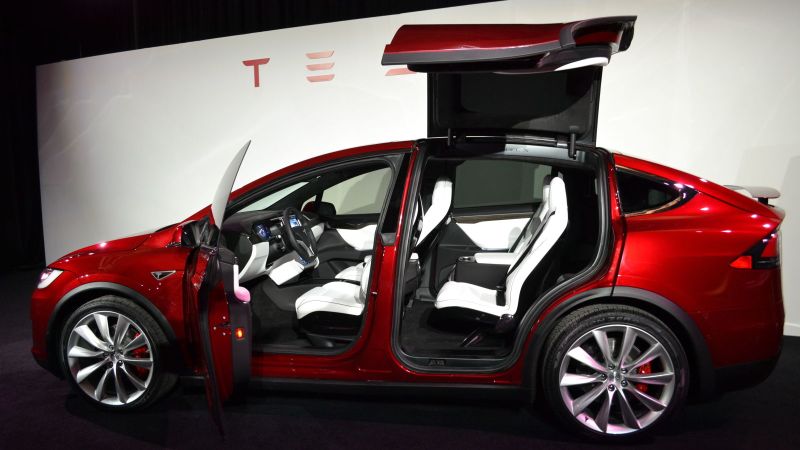 2) The Panoramic Windshield: The Model X has largest all glass panoramic windshield which provides you obstruction free visibility to driver and all passengers. The windshield runs from the base of the hood to all over the front two seats and ends at the B-Pillar. The rear view mirror floats almost halfway up the windshield on a small support beam, while sun visors pivot down from the A-pillars and magnetically snap into place provided on the rear-view mirror housing.

3) Medical-grade Air: It’s a first car with a medical grade HEPA filter which removes pollen, bacteria and viruses from outside air before circulating it into the cabin. This car is provided with Bioweapon Defence Mode, which when activated creates positive pressure with medical-grade air inside the cabin to protect occupants from bioweapon attack.

4) Single Post supported second row seats: Model X is available in six – seat and seven – seat configuration and according to Elon Musk; the biggest challenge for his team was to design the winged doors and one-post seats. Each second row seat mounted on a single post can move independently to and fro as well as recline forward or out of the way to provide more cargo area. 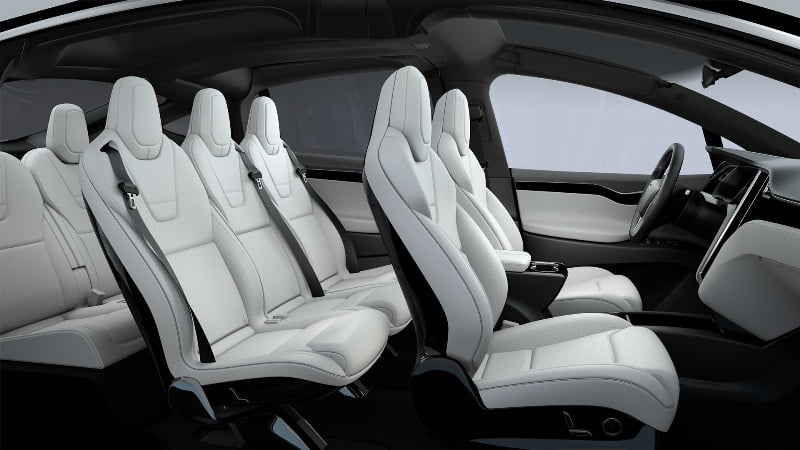 The third row seats can fold flat when not in use to maximize the cargo space.

5) Safety and Aerodynamics: The floor mounted battery structure lowers the CG position, thus reducing the risk of rollover at tight corners and the probability of rollover injury is half that of the next best SUV. The fl

oor mounted battery structure provides strength against side impacts as well, while the large front trunk without engine acts as an impact-absorbing zone. Also, it is the most aerodynamic SUV in production with least drag coefficient to achieve a 250 miles range on a single charge.

6) Active Safety: The Model X is equipped with high-tech gizmos like camera, radar and sonar systems that provides real-time information to the driver to avoid collisions and it is designed to automatically apply brakes in an emergency.

7) Ludicrous mode: Every Model X comes with a 90 KWh battery and two electric motors which gives you a 3.8 seconds 0-60 mph sprint. Add 10 grand to the base model price ($130,000) and you get the P90D with “ludicrous mode”. Tesla claims that with “Ludicrous Mode” active, 0-60 mph sprint comes in 3.2 seconds, which is on par with some of the best supercars currently available in the market. It’s crazy and ludicrously fast!!

Here’s a quick overview of the two variants currently available: