A recently uploaded video by Videoczine on YouTube shows 2016 Pagani Huayra R test mule leaving the Pagani factory in the Italian San Cesario Sul Panaro for road tests. We already know that Huayra production is limited to only 100 units which will soon come to an end (all 100 units are already sold). After that company will focus its attention on Huayra Roadster version which is also limited to only 100 production units. However, from this newly immerged video we could see that the company is simultaneously working on a more hardcore version of the Huayra similar to Pagani Zonda R for the race-track only. Its look like the company is planning to debut Pagani Huayra R together with the open-top Roadster version at the upcoming 2016 Geneva Show in March. 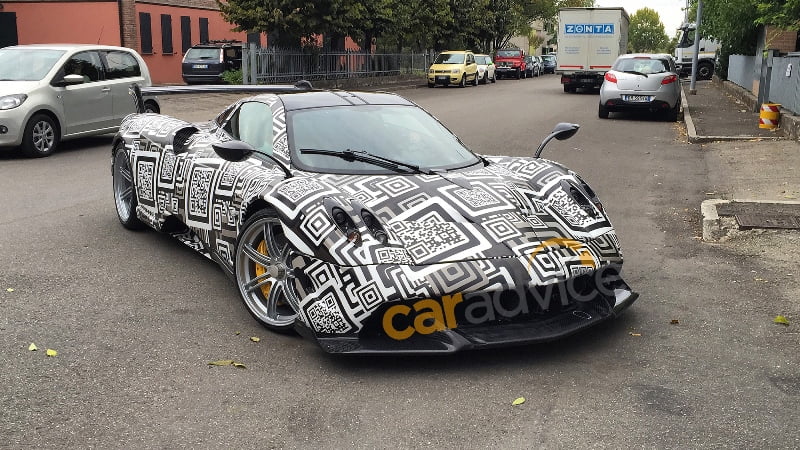 The experimental vehicle appears to be wearing large rear spoiler, new front splitter, large diameter exhaust outlets and modified rear splitter. The prototype also features a QR code, which when scanned, takes you to Pagani website showing a camouflaged car image with the video message saying that the car is coming soon.

The current Huayra is equipped with Mercedes – AMG supplied twin turbocharged 6.0 liter V-12 engine punching 730 hp at 5800 rpm and 1100 Nm torque. Its top speed is about 238 mph (383 km/hr) and can sprint 0-60mph in 3.0 seconds. But with rivals like the McLaren P1, Koenigsegg Agera RS, Lamborghini Aventador LP750-4 SuperVeloce and LaFerrari all developing excess of 700 horses, we can expect more power for the new Huayra R version (probably around 800 hp).

Pagani is constructing a new state-of-the-art factory near its current workshop in San Cesario Sul Panaro, Italy, which is expected to ready by this month. This new manufacturing plant may be used for production of Huayra R and Huayra Roadster version. This new hardcore version of Pagani Huayra could be limited to only 20 production units.

Please input your email address. That email is already subscribed. Your address has been added.
Tags: Modified cars
Yuvi October 4, 2015