The Auto Expo 2012 conducted in January, at Delhi was the best place to debut the Ford’s latest arrival, the Ford EcoSport. Although the model is optimal for Indian roads, the manufacturers have decided to launch it in Thailand and South America, in addition to China. The all new Ford EcoSport is incomparable and looks extravagantly magnificent as well. Although the design is developed from the base model of Ford Fiesta, the manufacturers had made keen attention to make it simply exquisite and unique with its compact and fuel efficient model and designs. The vehicle is expected to be launched in India in June this year with a price tag of around Rs 9 Lakhs.

Ford India has been known for giving stylish and sporty cars in the country. And the company has tried to keep the same expectations while manufacturing the Ford EcoSport as well. The exteriors are simply amazing with a size which is less than a normal SUV but bigger than a sedan. Starting with the front, one can simply make out that off-roading is never going to be a problem with this car. With 200mm ground clearance and signature large trapezoidal grille with Ford badge, the front looks enticing. Other features in the front includes headlamps with halogen lights, body coloured bumper with black air dam and small round fog lamps on either side of it. 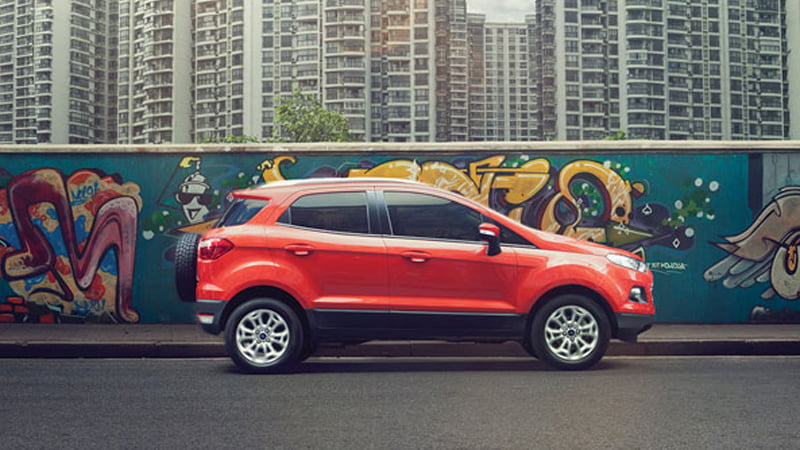 Onto the sides, an ascending curve drives down to the rear of the car giving it a rather never seen before profile. The inclined A pillar and the short hood is yet another feature that makes it quite distinguishable. The rear profile shows a larger rear window which extends to wrap around the sides together with the oblique tail-lamps. The tail lamps also include an inbuilt swing gate handle on to it which is yet another innovative design worth mentioning. Carefully mounted on the swing door is the spare tyre with a wheel cover. The overall length of the compact SUV is 4250mm, height of 1670mm and width of 2060mm. Also with a ground clearance of 200mm and water wading capability of 550mm, it makes the vehicle easily go wherever you like.

Once you step inside the all-new compact SUV, the EcoSport, you can see the matching resemblance to that offered by the base model, the Ford Fiesta. The buttons are neatly stacked onto the sporty central console. It has an inbuilt magnificent and powerful audio system that supports USB/auxiliary in addition to the CD/MP3 player. It has a spacious glove compartment which ensures maximum space for storage of particulates. In addition to the steering controls, the Smart Keyless entry, the rear parking sensors and Bluetooth make the features complicated and useful. The voice control feature makes the car a real piece of creativity and this feature is never seen before on a compact SUV. 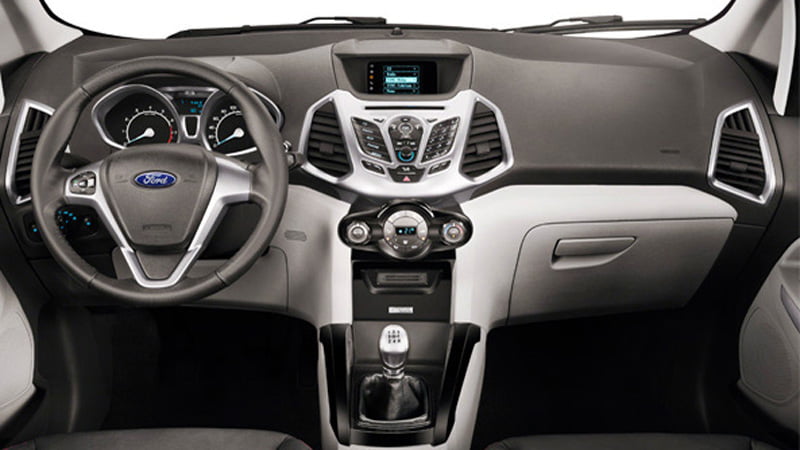 The Ford EcoSport will be powered by a 1.0 Litre Ecoboost petrol engine. This new innovative three cylinder petrol engine uses upto 20% less fuel compared to traditional 1.6 litre petrol engine and still produces a maximum power of 125PS and a torque of 170Nm at 1500 rpm. The engine block for this vehicle is made out of cast iron as against aluminium which will help to reduce the amount of energy required to warm up the engine by upto 50%. The CO2 emission given out by EcoSport is 140g/Km making it cleaner and green. This engine will be mated to a 5-speed manual transmission; however there also will be an option for 6-speed power shift automatic transmission with dual clutch taken from Ford Fiesta.

The dual airbags at the front for both the driver and the co-passenger seats, the side curtain airbags ensure complete safety of the passengers within and make sure that much lethal harm is prevented. In addition to this, the Electronic Stability Program (ESP), the rear parking sensors, Electronic Brake force Distribution (EBD), the Hill Launch Assist, and the seat belts for the three rear seats also ensures that passengers are in complete safety all through the drive at every point. For ensuring clear vision of the road while travelling through adverse weather conditions, front fog lamps are provided to maintain a comfortable and safe ride.