The Japanese automaker Honda has already captured the Indian automobile market in the hatchback and the sedan segment with the introduction of Brio, Amaze and the New City is the last couple of years. Now, it plans to get a hold of the MPV segment with the launch of Honda Mobilio in September 2014. Being the first car from Honda in the MPV segment in India, Honda Mobilio has created a much awaited hype with 20000+ bookings in just two months. This 7-seater MPV is already giving a tough competition to the existing MPVs i.e., Tata Aria, Nissan Evalia, Maruti Ertiga and Toyota Innova. Honda Mobilio comes with a warranty of 40000 kms or 2 years (whichever comes first). It is available in 10 different variants, of which 6 are petrol engine and the other 4 are diesel engine. Honda Mobilio is also priced very competitively between 6.5 – 11.5 lacs (ex-showroom price).

Among all the present MPVs in the Indian market, Honda Mobilio promises to be the most appealing and eye catching. From the front, it resembles more or less like the Brio and Amaze with dew drop shape headlight cluster, consisting of powerful headlamps and turn indicators placed between the large hexagonal meshed grille fitted with chrome plate on which the Honda logo is skillfully placed. The air dam consists of long and thin fins. It is surrounded on either sides with oval shaped fog lights on a matt black background. From the side, Honda Mobilio gets a forward slanting aerodynamic profile similar to Jazz with sleek ridges. The pillars are provided a shiny black finish, whereas the door handles and ORVMs get the body color. The 15 inch steel/alloy wheels also add up to the superior looks of this MPV. 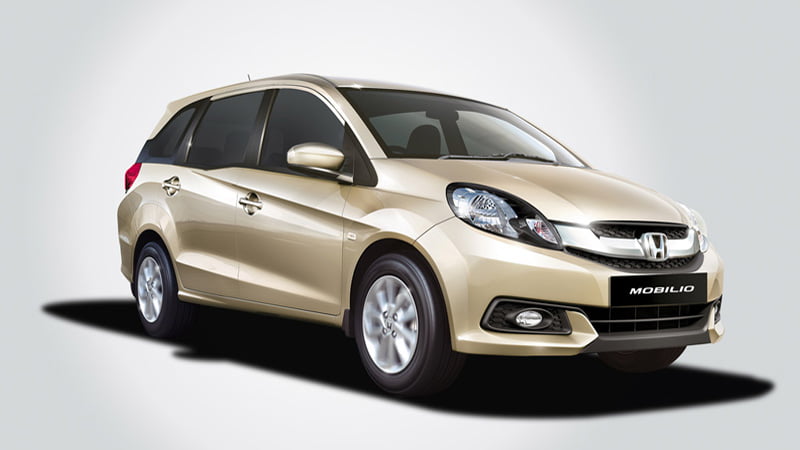 
Honda Mobilio’s design gets even more attractive looks from the rear as compared from the front. Not only is it provided with a large windscreen, but is also endowed with an integrated rear spoiler to make it look sporty. Other features include the rear wiper with washer, defogger, athletic tail lamp cluster, chrome plated company badge, high mounted LED brake lamp. The rear bumper is quite large and bulky and is fitted with high quality reflectors covered with honeycomb shaped matt black colored strips. All in all, the Japanese have taken immense care while designing the aesthetics of this MPV. Honda Mobilio measures 4386 mm in length, 1683 mm in width and 1603 mm in height with a minimum ground clearance of 189 mm.

Honda has made optimum and clever use of its cabin space while designing the interiors of Mobilio. This 7-seater MPV consists of 60:40 split slide reclined second row of seats, whereas the third row seats are 50:50 split reclined. 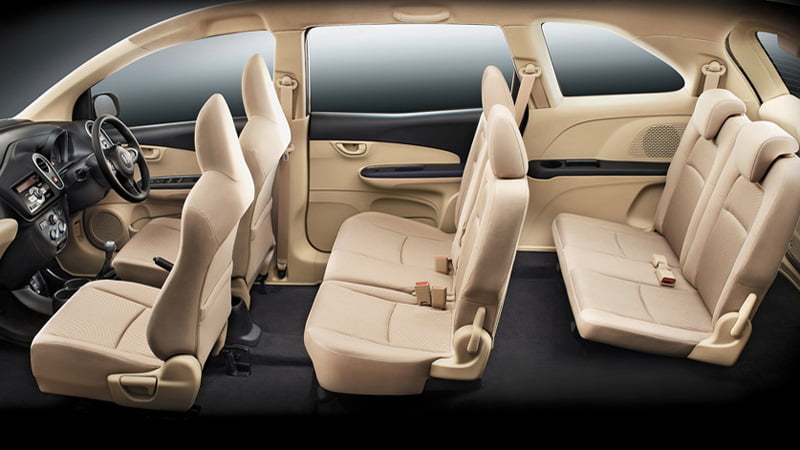 Honda Mobilio is powered with both; petro engine and diesel engine variants. While the former is a 4 cylinder, 16 valve, 1497 cc i-VTEC SOHC engine capable of producing a power of 119 bhp at 6600 rpm and a torque of 145 Nm at 4600 rpm, the latter is also a 4 cylinder, 16 valve, 1498 cc i-DTEC DOHC engine capable of producing 100 bhp power at 3600 rpm and 200 Nm torque at 1750 rpm. Both the engines are equipped with a 5-speed manual transmission gearbox. Based on the Honda’s Earth Dreams Technology, both the engine variants are the most fuel efficient vehicles in the MPV segment. While the petrol variant gives a mileage of 14 kmpl to 18 kmpl from city to highway, the diesel variant gives best in-class mileage of 20 kmpl to 24 kmpl.

The Handling of Honda Mobilio is exceptionally good. You won’t feel it getting out of control at high speeds. The ABS (Anti-lock Braking Mechanism) and Electronic Brake Force Distribution System are provided for all the diesel and top end petrol variants, however the conventional front disc and drum brake at the rear comes as standard for all the variants. For suspension, the front axle gets the modern McPherson Strut system, while the rear is coupled with the torsion beam system.