A limited black edition of the Porsche Cayman has been launched, in 2012, by the world class luxury car manufacturer, the Porsche. About 500 units of the car were only produced during this time in India. The brilliance in the performance the car has offered is contributed by the 6 cylinders and the 3.4 liter engine capacity. The car offers an engine power of 330bhp at the rate of 7400rpm, which is noticed to be 10bhp more than that of the normal Cayman. The ex-showroom price for this limited version of Porsche Cayman ranges from Rs. 62 – 75.7 lakhs.

The design of the all new Porsche Cayman is quite distinctive and befitting for the sporty profile of the car. Concave and convex curves molds up the shape of the car and the styling that has been used in this version is something that has never been imagined before. The elongated air pipes in the front give a touch of perfectionism in case of performance capability and the design is quite refreshed. A sturdy stance of the car is offered by the proportional perfection of the front apron and the lid spoiler is found to be reimbursed. The front axle is seen to be a little squeezed to bring out the hidden beauty. The front wings, the headlights, LED lights and fog lights give the car a far sportier outlook. The overall width, height and length of the car are 1801mm, 1294mm and 4380 mm respectively. The ground clearance offered by the car is 110mm. 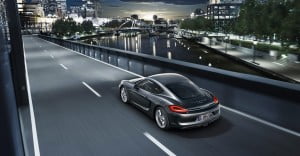 With the large windows, dome shaped roofs and low seating position, Porsche Cayman provides an airy atmosphere and thus it is designed to be driven 365 days a year. The driver’s seat is designed such that the driver experiences the ultimate comfort and all the controls are at the reach of the driver. The is a luggage compartment at the front and a rather  luxurious luggage space at the rear end.  The centrally placed instrument cluster includes an analogue Rev counter with speedometer and a display with key info from the on-board computer. The three spoke steering wheel comes equipped with an airbag. The steering wheel has leather covering and suitable multifunctional keys embedded on it. The seats are Alcantara upholstered to ensure complete comfort to the passengers. 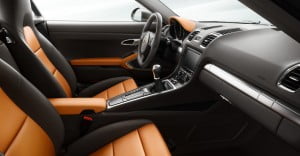 The all new Porsche Cayman comes equipped with a number of safety features to ensure that the passengers are in complete safety during the drive. The Hill start assist system together with the PDK transmission makes sure that the drive is comfortable and smooth. The car has a very light weighted suspension system with transverse links and the spring struts at the front and the rear ends. The car comes with the PASM feature or the Porsche Active Suspension Management, which is an electronic damping control that helps in ensuring direct steering while its movement through damp regions. The magnificence of the steering wheel is much experienced at tight corners and while parking the car. 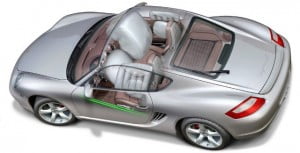 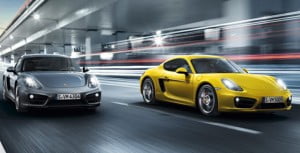