Toyota Innova is one of the most popular Multi-Utility Vehicle (MUV) that the Indian auto market had ever seen. The official name of this car in Indonesia is Toyota Kijang Innova whereas in India, it is known simply as the Toyota Innova. Studies have revealed that this car has replaced Toyota Kijang globally. However, in India, this MUV has replaced Toyota Qualis and got its name embedded in every human mind. The famous Toyota Motors, following their success in every country, finally collaborated with an Indian Kirloskar group and is known as Toyota Kirloskar Motors. Toyota Innova is regarded as the most commonly used vehicles in India and has been found to be the best match for Indian roads. Although Toyota had launched this version of Innova in 2005, it had found their path to success, ever since. Being one of the most economical MUV in India, Toyota Innova ranges from 9.2 – 14.2 lakhs.

The new Toyota Innova, coined as Toyota Innova Aero has been upgraded with fine quality features in its exteriors in 2012. From the front, the protruding indicators on its angular headlamps give this car a more dignified appearance. The beautiful grille which encloses the oval shaped fog lamps with the chrome thick band makes this car look rather wide. The windshield, slanted A and D pillars and outstanding alloy wheels are other stunning features of the advanced Toyota Innova. The rear has a quarter windows along the side and a rear tinted window. Good ground clearance of 176mm along with these jaw dropping features makes the new Toyota Innova simply irresistible. The MUV measures 4584mm in length, 1760mm in width and 1760mm in height. 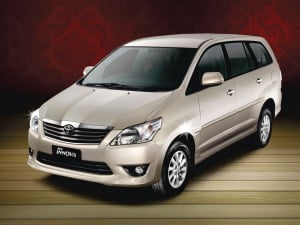 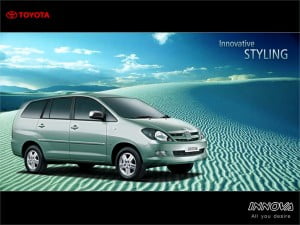 The classic version of the Toyota Innova is available in both 7-seater and 8-seater. A combined comfort and ruggedness associated with other MUVs are often offered in this version of Innova. The plushest interiors ever seen in an MUV segment has been the key feature that makes this product outstanding. Space and the comforts offered by the car is the most significant specialty of this car. The elegance of the interior designing is another contributing factor that makes the product wanting. Beige shade is offered on the plastics that are used on this esteemed car. An advanced graphic instrument panel has been the yet another feature offered by this MUV. The dashboard is colored with a single tone all through, which is separated from the features stuffed under it by a dark faux wood. The gear knob, steering wheel and other upholsteries is made out of leather which gives this car a yet more impressive interior. Wooden finished pane, Multi Information Display, Tachometer, Trip Meter, High Quality dual tone seat color, etc. are some of the distinguishing features of the new Toyota Innova. 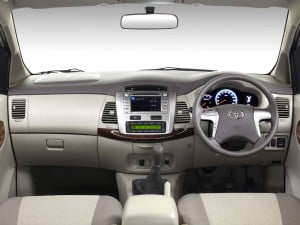 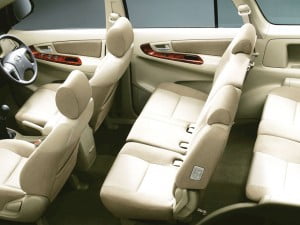 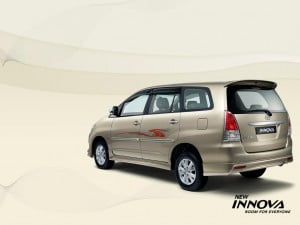 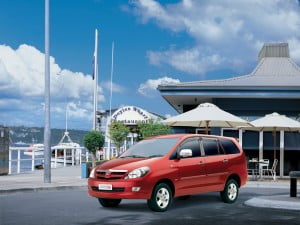