The latest Mercedes Benz A-Class to be released on 30th May, 2013 seeks to open up a new trend of vehicles in the compact segment. They have built the new A-Class afresh to the very last detail of the vehicle. It has several features that make it stand out on its own class. With markedly emotive design, powerful engines, extremely efficient emission norms and best in class security, this new compact SUV is set to become an important milestone for the German luxury auto manufacturer. Set to be launched by 30 May, 2013, this car will be priced around €24,000.

The exterior design has a sculptural shape with characteristic lines on its sides. It has defined edges with interplay of both convex and concave surfaces to bring about a play of light along the car sides thus resulting in a unique appearance. It has a pronounced V-shape with separate headlamps, a radiator grille having a central star of a Mercedes and additional air intakes on the sides of the vehicle. Light modules and LEDs behind the cover glass of the headlamps are arranged in a manner that will cause a “flare effect” used for driving during the day for driving lights as well as indicators. There is a feature line within the headlamp that causes the flare. LED modules are there for running lamps during the day and for the indicators there are some bulb sets. 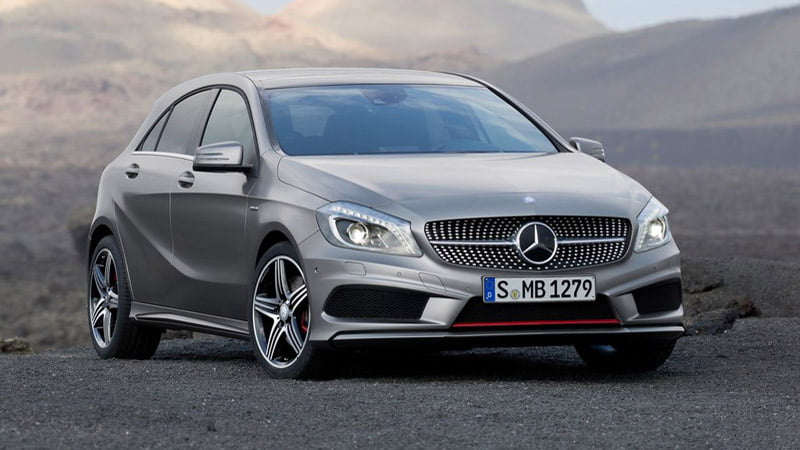 On the roof there is a perfect interplay of excellent aerodynamics and a dynamic design. The roof has its surfaces smooth, taut and with an arcing curve. There is a roof spoiler that suitably hides all aerials while at the same time it gives the vehicle a sporty look. It also has shoulder muscles that are powerfully-shaped sitting just above the rear axle and they emphasize the coupe-like car character. The tail end is also well shaped with the tail lights having a surface finish that improves the flow of air around the car. It has airflow break-away car edges within the rear section that are well defined.

Interior design of the A-Class has the “Mercedes Benz Aesthetics No.2” which was unveiled at the motor show in Detroit back in 2011. It is made from materials of a high quality and the trim elements have an electroplated finish. There are thus real surfaces of metal with an effect of a “cool touch”. The instrument panel is embedded with five round vents, whose outer rings have a high quality electroplated finish. There’s also an extensive range of seat coverings, in terms of the materials used like the leather, fabric or Artico/fabric colour combination. Sports seats with integrated head restraints are also available with all optional design and equipment lines. The sporty nature of the seats is accentuated by the opening between the upper edge of the seat backrest and the head restraint. On the back of the front seats this opening is edged with a frame in silver chrome in conjunction with the Light and Sight package, which can also feature ambient lighting. 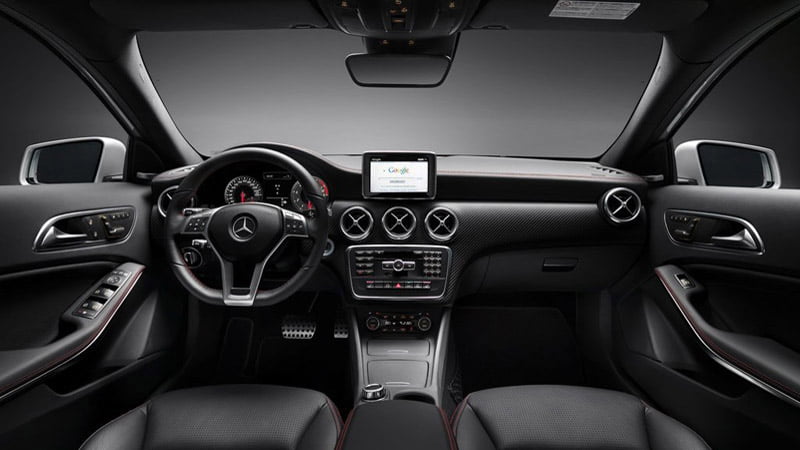 The new Mercedes Benz A-Class gets powerful engines in the range of 80 kW that is 109 horsepower to 155 kW or 215 horsepower. These new four-cylinder models from Mercedes-Benz occupy a leading position by virtue of their performance, high efficiency and very low emissions. They impress with their smooth, superior power delivery and offer customers refinement at the highest level. Also they are extremely efficient and only manage emissions of 98 grams of carbon dioxide per kilometer.

The A-class gets a drag coefficient of 0.27 which is best in its class. It has the collision prevention assist system that is radar based. The suspension of the new A-Class is made up of a four-link axle with a power steering that is electromechanical with functions for assistance. It also has an Extended Traction Control (XTC). Dynamic handling is enabled as the center of gravity and seating position has been lowered greatly. It also has an electric brake for parking hence the handbrake lever is not necessary. If the electric brake is pressed at speeds of over 4 km/h then it acts as an emergency brake.