Hyundai has recently launched its new sub four meter sedan, the Xcent started based on the Grand i10. It is the first time a 4 meter sedan from Hyundai will be offered in the Indian market. Hyundai Motor India roped in Bollywood star Shah Rukh Khan as brand ambassador for its compact sedan Xcent.

The newly developed 1.1 -liter CRDi diesel second generation U2 and the 1.2 – liter petrol Kappa Dual VTVT – Hyundai has given the Xcent the same engines as the Grand i10. The 1.1 CRDi U2 -Liter- pumps 72HP at 4000rpm and 180.4Nm between 1750 and 2500rpm. Hyundai says they have worked on the Xcent diesel engine, to achieve improved performance, 13 percent more torque and better mileage. The 1.2 – liter petrol Kappa delivers 83PS power at 6000rpm and torque 111.8Nm. Hyundai claimed to improve the turbocharger in diesel Xcent for better throttle response and acceleration.

Hyundai brings the ‘Fluidic’ design philosophy to fresh levels with each product launch. It borrows the front fascia from its hatchback sibling, the Grand i10, but with a bit of a difference. The signature hexagonal grille gets an extra chrome lining. The Hyundai Xcent with its aerodynamic and sporty profile projects a Modern and Progressive Styling. It has a Stylish and aerodynamic kick-up trunk lid design with chrome garnish. 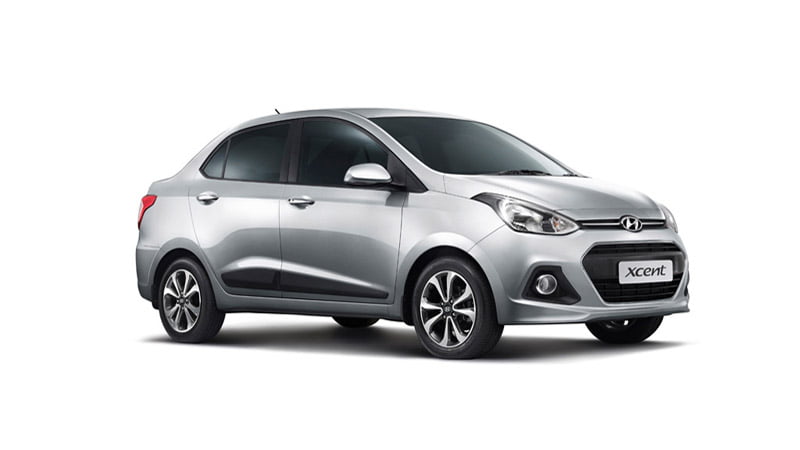 The rear overall looks neat and the roof line of the car flows smoothly on the trunk lid to merge. Since the Xcent was designed to be a sedan, the outer lines on the car power good, right from the front to the boat. However, the rear looks plain, partly due to the simple taillights used. If you ignore the detailing on Xcent done, you would find at least up to the B – pillar exactly identical to the hatchback.


With dimensions of 3995 x 1660 x 1520mm the Xcent is well proportioned. It is 20mm narrower than the Amaze and 35mm narrower than the Dzire but the open doors are wide enough and comfort factor is not affected. The 8- spoke alloy wheel power his job well by attracting eyeballs fast. The rear profile is a bit basic. Overall, while the Xcent does wow you with its design, it is a smart looking car.

Step inside the cabin of the Xcent it feels spacious, much different than regular compact sedan. Xcent boasts extremely well made and feature rich interior. Legroom and headroom, both front and rear are on par with the class. The cabin of the Xcent is feature-rich, to say the least. The dual-tone dashboard is well laid out and all controls are within easy reach. In the top-end variant, there are some segment first features like a rearview camera display in the rearview mirror. The plastics are of premium quality and the center console is divided into two distinct parts. The upper section comprises of the audio system which comes with USB connectivity and with HVAC in the lower console. 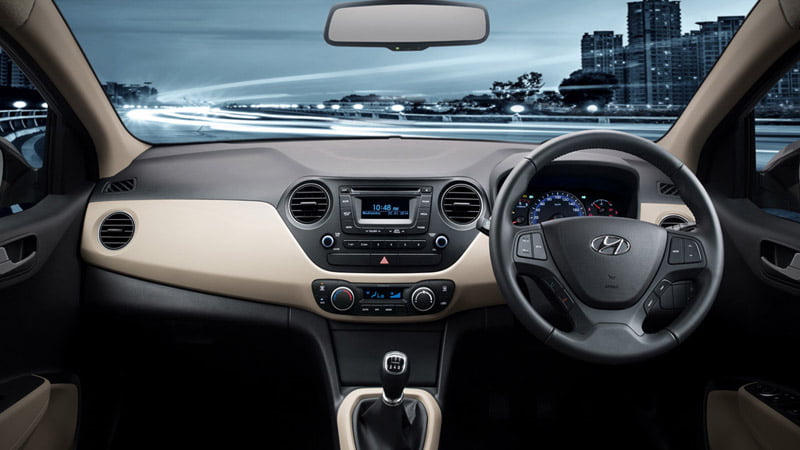 The Hyundai Xcent comes with two configurations that include 1.2l kappa 4-cylinder petrol engine and 1.1l U2 3-cylinder diesel engine. The 1.2l kappa petrol engine is available in two transmission options, combined with either a 5-speed manual transmission or 4-speed automatic transmission. It produces power at 6000rpm and 83Ps 11.6kgm torque at 4000rpm. The power supply is linear and smooth. The 1.1l diesel CRDi U2 3-cylinder engine produces 72HP power at 4000rpm and torque at 1750-2500rpm 18.4kgm.

Diesel Engine is bit noisy as the sound waves travel into the cabin. Turbo lag is experienced at lower revolutions which smoothen up as the engine crosses 2500rpm. Some changes in the ECU and electronically controlled waste gate have increased the power by 1bhp and torque by 2.1kgm. Downshifting is easy compared in petrol engine compared to the diesel ones.

Gearbox is very smooth which requires less effort. Hyundai says the ARAI-tested mileage for the petrol engine is 19.1 kmpl, while for the diesel engine is 24.4 kmpl.

Suspension comes with an independent McPherson strut type unit at the front and non independent torsion bar at the rear. Suspension noise is often heard in the rear seat but it has ride comfort even over small potholes. Extra weight and broader tyres makes the handling better. Steering is very precise and feels light. Maneuverability scores high in corners and U turn, but there is a bit body roll. Brake control is less which requires too much effort.

The Sedan has a Rear Defogger that removes mist during foggy conditions to ensure proper visibility. Top end car comes with Antilock braking system and dual airbags. It is equipped with reverse parking camera and electro chromatic rearview mirror as well. Car structure is made up of anti corrosive steel that reduces the impact energy.

Please input your email address. That email is already subscribed. Your address has been added.
Tags: Hyundai Xcent
Bob November 23, 2014