Maruti Suzuki launched its first ever premium crossover, the S Cross last week in the Indian market. The company has previously got a good response from its sedan model Ciaz and is expeting the same from the S cross in the SUV or crossover segment. To make things more captivating, Maruti Suzuki has made this vehicle available exclusively from its brand new dealership network, branded NEXA. This showroom is meant to offer only the premium products from the company.

The Maruti Suzuki S Cross was first showcased at the 2014 Delhi Auto Expo, however is already available in the international market since 2013. Avaialble only in the diesel variants, this vehicle is expected to compete against Renault Duster, Ford Ecosport, Nissan Terrano and the newly launched Hyundai Creta. Even though the competition is stiff, the company expects to sell 4000 – 5000 units of the S Cross every month. That might be a challenging target, but considering the fact that the vehicle gets some unique USP’s like the competitive price, good powerful diesel options and best in class fuel efficiency, it is quite likely that the company might achieve it.

One cannot simply deny the fact that the new Maruti Suzuki S Cross has some similarities with the SX4 sedan, which has not been that popular in our country. In the International market, the S Cross is known by the name SX4 S-Cross. We totally adhere to the reason that the company puts this car into the Crossover category, as this car is not big enough to be called as a compact SUV. The overall looks of the car resembles more like a big hatchback. 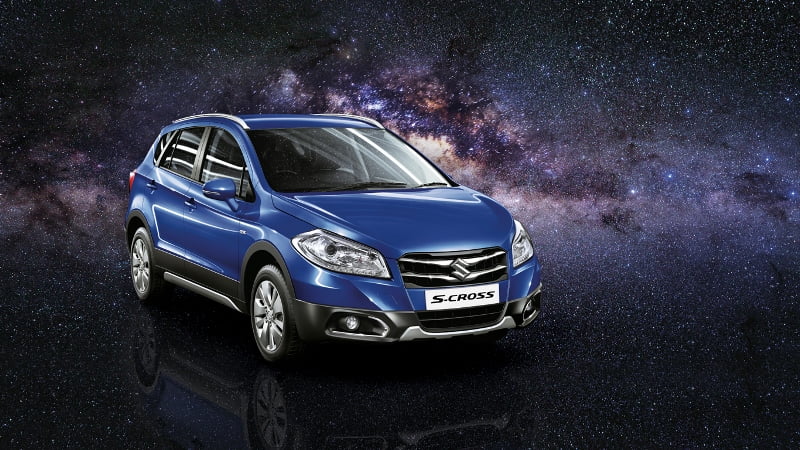 On the front you get to see a wide windshield with a pair of rain sensing wipers. The bonnet is more or less concave in shape without any bold lines standing out, expect that it is slightly raised towards the corners. As we slide down, we can notice bold looking radiator grille with two horizontally positioned chrome plate slats with the Suzuki symbol on it. Either side of which is the Bi-xenon projector headlamps, which are first in the segment. The LED looking strip below this headlamp is actually a pilot lamp. Below the radiator grille is a bumper with silver coloured skid plate and a pair of pretty bright fog lights, partially surrounding it with chrome lining that again gives a premium look to the car.

On the sides, the first thing that should catch your attention should be the sloping roof that highlights the car’s sporty look and superior aerodynamics. Elegant contours across the body smoothens the airflow that adds to more aerodynamic characteristics of the car. A bold ubiquitous crease line extends from the tip of the headlamps all the way to the rear tail-lamps. On the side top, silver coloured roof rails gets no gap between the roof and the rails unlike the ones that we get to see in Renault Duster or the Hyundai Elite i20 Cross. Other noticeable features on the sides includes the black colour B-pillars, body coloured door handles, ORVMs with integrated LED indicators and neatly carved wheel arches integrated with 16 inch steel or alloy wheels depending on the variants.

Finally the rear gets a trapezoidal shape that accentuates the body’s natural shape. The main attraction is the split combination tail lamps with integrated turn indicators on it. Probably you can correlate it with the eyes of Autobots from the movie Transformers. Other features at the rear includes windscreen with wiper, defogger, a stop lamp above the windscreen, a short stubby radio antenna, 4 rear parking sensors, two reflectors and a silver skid plate on the bumper. There’s a reversing camera just above the number plate but it is aligned on the left, which might make judgement on the vehicles at the rear a bit difficult. The vehicle measures 4300 mm in length, 1765 mm in width and a height of 1590 mm. It has a turning radius of 5.2 metres.

Just as exteriors, the interior of this new crossover from Suzuki gets new features and functions which makes it more attractive in the segment. As soon as you enter the car, you can feel a lot of room for the passengers as well features that are impressive. Lets start with the dashboard.

There’s a premium touch to the dashboard design with the silver linings around the TFT display and AC ducts in the centre as well as the AC ducts on the left and right corners. This feature kind of breaks the all black monotony which would would have been there otherwise. As a part of smartplay infotainment system, the dashboard in integrated with a coloured TFT display with touchscreen that incorporates Bluetooth, smartphone and media connectivity. Together they add a new dimension in the car infotainment. The steering wheel is more or less the same like that in Suzuki Ciaz. This includes leather wrapped steering wheel with audio and voice controls mounted on it. The audio control buttons is for controlling the sound system and the voice command feature enables you to give verbal commands for navigation, playing music and making phone calls. Cruise control is also available here. Behind this wheel is a HI definition TFT screen that shows vital information for your journey, including fuel consumption, trip meter and driving range. Other features on the dashboard includes the Start/Stop button, buttons for fog lamp and parking sensor under the right side air vent.

Coming onto the seats, leather upholstered option is available only for the top models, while the rest gets fabric seat covers. The front armrest in the center can be slid forward and backwards and at the same time is wide enough to be shared between the driver and his co-passenger, whereas the rear arm rest gets cup holders. Adjustable head rests are available on rear seats. A boot space of 353 L is available with the rear seatback raised at 1st position and 375 L Boot Space with the rear seatback raised at 2nd position. A total boot space of 810 L is available with complete rear seatback folded. Other notable features inside the S Cross includes tilt steering, illuminated glove-box, power windows, telescopic steering, automatic climate control, height adjuster for driver’s seat, reclining rear seat, reverse camera, rain sensing wiper and auto dimming rear view mirror.

Maruti Suzuki S Cross is offered with only diesel options as of now. However there are two diesel engines to choose from. The first one is the 1.3 litre (1248 cc) turbocharged DDiS 200 engine similar to the one used in Ciaz that can produce a maximum power of 88.5 bhp at 4000 rpm and a maximum torque of 200 Nm at 1750 rpm. This engine is mated to a 5 speed manual transmission gear box. The second engine being the 1.6 litre (1598 cc) DDiS 320, which is capable of producing a maximum power of 118 bhp at 3750 rpm and a torque of 320 Nm at 1750 rpm. The transmission available with this engine is a six speed manual gearbox with a Variable Geometry Turbocharger (VGT). Both of these engines have 4 cylinders each with a double overhead camshaft valve configuration.

As the S-Cross is perceived to be a premium product from the manufacturers, we can expect a better handling compared to the others. The open road performance of the vehicle is impressive thanks to its high torque to weight ratio. The gear shift is smooth and will not disappoint you. The vehicle has a good stability even at very high speeds. Even the braking is strong with the all wheels disc brake system as well as the ABS system. 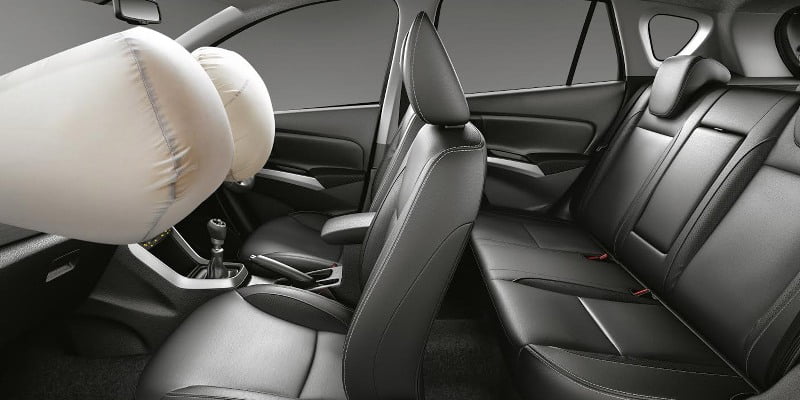 Safety features in the vehicle includes Air bags for the driver and his co passenger in case of frontal impact, Total Effective Control Technology (TECT) concept for the S Cross body which is light weight and also absorbs the impact to protect the occupants in case of collision, central locking, anti theft security system and reverse parking sensors.