Dubai is known for its luxury shopping malls with mammoth aquariums, biggest and tallest skyscrapers, extravagance and the richest Police fleet made of the most expensive supercars on the planet. The Dubai Police fleet has already an impressive fleet of supercars which includes Lykan Hypersport, Bugatti Veyron, a Ford Mustang GT, a Ferrari FF, limited edition Aston Martin One-77, a Chevrolet Camaro SS, an Audi R8, Mercedes Benz SL63 AMG, Lamborghini Aventador and others.

The Dubai Police have added a hybrid Porsche 918 Spyder to its ever-growing patrol vehicle lineup. This white and green eco-friendly supercar is on display at the Dubai International Motor Show and will be used mainly to patrol the tourist locations. The car is equipped with the latest equipments and cameras needed for patrol vehicles and linked electronically with command and control centre of Dubai Police. 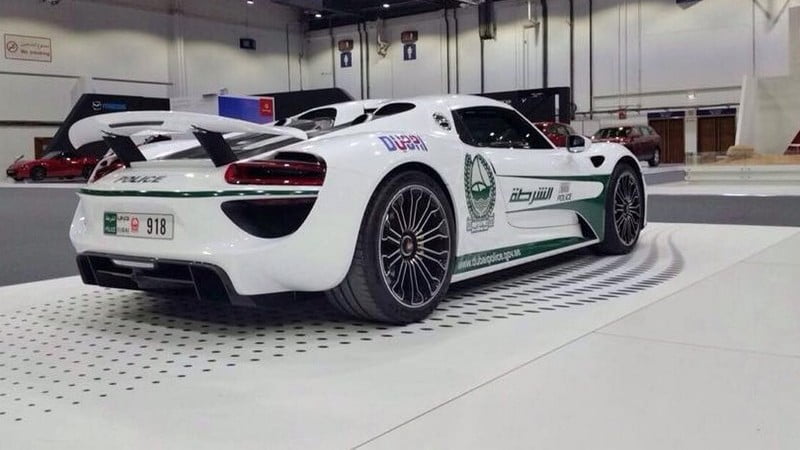 The Porsche 918 Spyder is a limited edition hybrid supercar with only 918 units manufactured and sold. The Spyder is a mid-engined plug in hybrid supercar powered by a naturally aspirated 4.6 litre V8 engine with two electric motors. The V8 punches whopping 608hp with two electric motors additionally providing 279hp for a combined output of 887hp. The car has a top speed of 340 km/hr (210 mph) and an all -electric range of 19 km with fully charged 6.8 kwh lithium-ion battery pack. 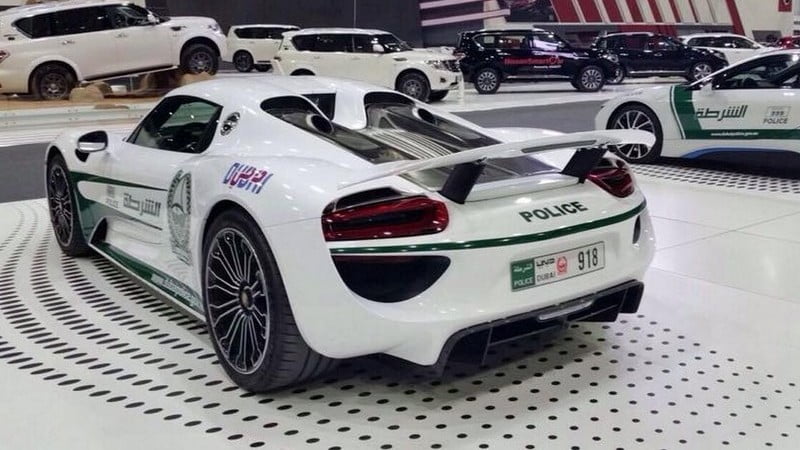 This Police car doesn’t have the police lights on the roof, but it still stands out from the rest of the cars due to its white -green colour combo and police livery. Dubai Police mainly uses these supercars fleet for cruising the streets to show off luxury, richness and to attract global media attention from tourism point of view.

While touring in Dubai, don’t be surprised to see a tourist approaching a Police officer to arrest himself just for a ride in a supercar. Check out the list of supercars the Dubai Police have in their inventory below. Hope you would be surprised!!